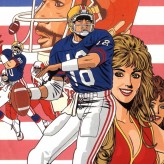 Play the classic American football arcade game for the Neo Geo system and battle against 10 football teams! Kick the ball, pass the ball, and score a touchdown in Football Frenzy! Play the tournament mode and march toward the title and control your destiny!

Football Frenzy features a sides-scrolling television style view, overhead perspective, and a retro art style. In this game, the two teams compete in getting more points over a period of time. Score is recorder when the ball is delivered to the enemy’s goal. Football Frenzy features 10 fictional football teams with highly simplified controls. Football Frenzy is known to be the only American Football game to be ever released in the Neo Geo system back in the days.
Only one player mode is available.

Play Football Frenzy game online in your browser free of charge on Arcade Spot. Football Frenzy is a high quality game that works in all major modern web browsers. This online game is part of the Arcade, Sports, Emulator, and Neo Geo gaming categories. Football Frenzy has 2 likes from 3 user ratings. If you enjoy this game then also play games Backyard Football and NCAA Football. Arcade Spot brings you the best games without downloading and a fun gaming experience on your computers, mobile phones, and tablets. New arcade games and the most popular free online games are added every day to the site.