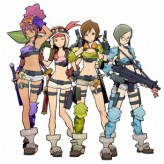 Explore a vast world, talk to the people, collect equipment, and fight your way through monsters and other villains in Final Fantasy Legend II! Dive into complex dungeons, gather your band of heroes, and recover all the pieces of The Magi to complete the legend!

Final Fantasy Legend II is the second game in the Square’s Saga RPG series following Final Fantasy Legend. Also known as SaGa 2, this 1990 role playing game features a four person party where the player takes control of each person’s actions. The story this time revolves around the shards of a powerful force called MAGI. The MAGI was split into 77 difference pieces that were scattered throughout the world. Your ultimate goal is to gather these shards, and face danger at every turn.
Click inside the box first to activate controls.

Play Final Fantasy Legend II game online in your browser free of charge on Arcade Spot. Final Fantasy Legend II is a high quality game that works in all major modern web browsers. This online game is part of the Adventure, Strategy, Emulator, and GB gaming categories. Final Fantasy Legend II has 4 likes from 4 user ratings. If you enjoy this game then also play games Final Fight and Dragonball GT: Final Bout. Arcade Spot brings you the best games without downloading and a fun gaming experience on your computers, mobile phones, and tablets. New arcade games and the most popular free online games are added every day to the site.