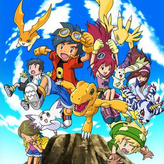 Play the role of a young adventurer and befriends new Digimon and rise in the rank in this fun role-playing video game – Digimon World DS! Will you be able to rise up in the ranks and become the best Digimon handler in the cyber world? Good luck and have fun!

Digimon World DS, also known as Digimon Story, is a role-playing adventure video game released back in 2006 for the Nintendo DS (NDS) handheld gaming console. The game features many new Digimon including new Digivolutions, Unusual Digivolutions, and so much more. the game introduces two special Digimon, DotAgumon and DotFalcomon, both have special traits that can help the player overcome various challenges. In this game, the player can also pool out resources to create a new type of Digimon.

There have been 36 likes from 39 votes on this game.

Play Digimon World DS game online in your browser free of charge on Arcade Spot. Digimon World DS is a high quality game that works in all major modern web browsers. This online game is part of the Adventure, Action, Anime, and Nintendo DS gaming categories. Digimon World DS has 36 likes from 39 user ratings. If you enjoy this game then also play games Pokemon - Digimon FireRed and Digimon Digital Monsters. Arcade Spot brings you the best games without downloading and a fun gaming experience on your computers, mobile phones, and tablets. New arcade games and the most popular free online games are added every day to the site.