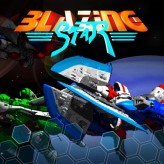 Start the aerial combat and step into the fray in this side-scrolling space shooter game. Participate in the interplanetary war in Blazing Star! Choose your character and launch your ship! Charge your weapons and defeat hundreds of enemies coming your way.

Blazing Star is a popular horizontal shooter game that is considered as the spiritual successor to the classic Pulstar. The game features pseudo-3D sprites and anime characters and CGI cutscenes making it very popular in the past. Participate in the never-ending war between two human factions Remuria and Mutras and try to bring victory on your side! Blazing Star is a very challenging sidescroller game where one shot from an enemy will send your ship exploding. Nowadays, this genre is called Bullet Hell.

Play Blazing Star game online in your browser free of charge on Arcade Spot. Blazing Star is a high quality game that works in all major modern web browsers. This online game is part of the Arcade, Shooting, Emulator, and Neo Geo gaming categories. Blazing Star has 2 likes from 2 user ratings. If you enjoy this game then also play games Fire Emblem: Blazing Sword and Super Mario All-Stars. Arcade Spot brings you the best games without downloading and a fun gaming experience on your computers, mobile phones, and tablets. New arcade games and the most popular free online games are added every day to the site.