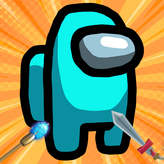 Among Us IO
advertisement

The blue impostors are trying to invade the medieval planet! Fight against the enemies by tapping the correct warrior to kill them in Among Us War. Get consecutive kills to unlock the bonus move. How long will you be able to survive the seemingly never-ending waves of impostors?

If you send the wrong unit, you will lose one heart. Lose all five hearts, and the game will end. Likewise, if even one Impostor manages to reach the far left corner of the screen, the game will also end. Every day, a new wave of enemies will march towards the castle. Try to earn the highest score by defeating as many opponents as possible and surviving the longest number of days. Play today and set a new record.

Play Among Us War game online in your browser free of charge on Arcade Spot. Among Us War is a high quality game that works in all major modern web browsers. This online game is part of the Arcade and Mobile gaming categories. Among Us War has 2 likes from 3 user ratings. If you enjoy this game then also play games Among Us: Single Player and Friday Night Funkin' vs Impostor Among Us. Arcade Spot brings you the best games without downloading and a fun gaming experience on your computers, mobile phones, and tablets. New arcade games and the most popular free online games are added every day to the site.