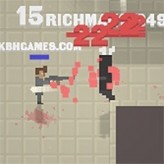 Get ready for some pixelated action packed shooter game and compete with random players from across the globe in this online multiplayer game Vertix Online! Participate on different game modes and shoot your enemies before they get you.

Vertix Online (also called Vertix.io) is an online pixel-based multiplayer shooter game with many different game modes. The game features a top-down view game play and features a Free for All death match mode where you compete against other players in a race to be the first to have 12 kill, Boss Battle mode where one player controls an overpowered creature while the others try to defeat him, Control Point mode that is played similar to king of the hill, and many other modes. No registration needed, just drop in the game and start shooting!

Play Vertix Online game online in your browser free of charge on Arcade Spot. Vertix Online is a high quality game that works in all major modern web browsers. This online game is part of the Arcade, Multiplayer, Challenge, and IO gaming categories. Vertix Online has 2 likes from 2 user ratings. If you enjoy this game then also play games Super Mario Maker Online and Call of Duty Online. Arcade Spot brings you the best games without downloading and a fun gaming experience on your computers, mobile phones, and tablets. New arcade games and the most popular free online games are added every day to the site.