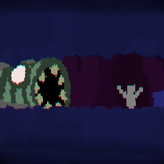 Wormb is another fun game developed by Stuffed Wombat. Step into the shoes of an unfortunate man who is trying to run away from a giant worm that will swallow him whole! Nothing out of the ordinary here, believing a serial killer is loose, our heroes investigate these seismic vibrations and is in for a surprise and adventure of their lives.

In Wormb, you take control of an unsuspecting man running away from a, yes, you guessed it, a giant worm. A 2D platformer with minimalist design. Wormb gives you the game's control by using the directional buttons from your keypad. This game might look like a popular ninety’s movie featuring Kevin Bacon, Tremors. Tired of their usual and dull routines, Val Mackee and Earl Bassett skip town. Mysterious deaths and a seismologist investigate the readings from below ground. The game brings you into the thick of the action. The premise is simple, like the movie’s climax jump through obstacles and avoid being eaten. Rocks, blocks, and other environmental hazards prevent you from moving and reduce you to worm chow. Time your jumps and dodges perfectly as the giant earth digger would stop at nothing to get to its next meal. Rocks begin to disappear near the end of your run. What do you do? Run forever? Or turn the tables and run towards the Wormb? Why wormb, you ask? Because it's a Big Worm, crazy story, minimal visuals to grip players, and a soundtrack that induces the survivalist in you.

Play Wormb game online in your browser free of charge on Arcade Spot. Wormb is a high quality game that works in all major modern web browsers. This online game is part of the Arcade, Action, Running, and Challenge gaming categories. Wormb has 1 likes from 1 user ratings. If you enjoy this game then also play games Five Nights at Freddy's 2 and Five Nights at Freddy's. Arcade Spot brings you the best games without downloading and a fun gaming experience on your computers, mobile phones, and tablets. New arcade games and the most popular free online games are added every day to the site.