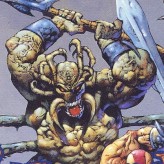 Use the weapon of your choice and master its use! Deflect enemy attacks and use a powerful counterattack to defeat your opponent in this classic weapon-based fighting game – Weaponlord!

Weaponlord is the first “true” weapon-to-weapon fighting game, that was released back in 1995 for the Super Nintendo Entertainment System (SNES). This game features a weapon-based combat, some complex blocking, lots of various gory moves, a deep counterattack system, and many more advanced fighting mechanics that inspired and was adopted by many modern games. In this game, players can cut off enemy clothing and their hair and can perform some brutal death combos. The game also features a password system that allows players to return to the middle of the game. There is also a secret password to allow the use of the powerful Demonlord Zarak.

Play Weaponlord game online in your browser free of charge on Arcade Spot. Weaponlord is a high quality game that works in all major modern web browsers. This online game is part of the Arcade, Action, Emulator, and SNES gaming categories. Weaponlord has 1 likes from 1 user ratings. If you enjoy this game then also play games Super Mario World and Super Mario All-Stars. Arcade Spot brings you the best games without downloading and a fun gaming experience on your computers, mobile phones, and tablets. New arcade games and the most popular free online games are added every day to the site.