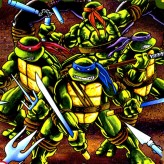 Join Leonardo, Michaelangelo, Raphael, and Donatello as they face Krang and Shredder to save their friend April O’Neil in this classic action game – Teenage Mutant Ninja Turtles – Fall of the Foot Clan!

Teenage Mutant Ninja Turtles – Fall of the Foot Clan is a classic 1987 action side scroller featuring the mutant ninjas. Play one of the four mutant super heroes and overcome 5 stages, each with their own boss at the end. Unlike other side-scroller game, this one features a unique continue system where if a turtle runs out of health, he will be captured by the enemy. The player must then select another turtle and continue where the last one left off. If all four turtles are captured, the game will be over resulting in a defeat. Will you be able to rescue April O’Neil and stop Shredder and his gang?