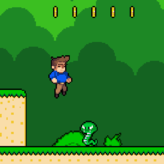 Play as Steve and overcome a myriad of obstacles and face a plethora of monsters in this retro-styled platformer game - Super Steve World! Collect power-ups along the way to defeat the monsters easily. Gather coins and find all the secret places of the world.

Super Steve World is a fun sidescrolling platformer game using the traditional platforming formula that was made popular by Mario game series. In this game, you will take control of Steve, and your goal is to reach the end of the stage and collect the only diamond on the level. By collecting hearts and potions, you will effectively give Steve an extra hit point - allowing you to absorb more hits before deducting a life. If you have a potion activated, Steve will have the ability to throw little embers and fireballs that will eliminate enemies when hit, fly up high in the sky, and more depending on the color of the potion used. By collecting precious stars along the way, you will be able to unlock new content. Collect a series of coins and you will be able to increase your precious life points that will prove itself useful when up against deadly crevices and tricky terrain. Good luck and have fun!

Play Super Steve World game online in your browser free of charge on Arcade Spot. Super Steve World is a high quality game that works in all major modern web browsers. This online game is part of the Arcade, Retro, Mobile, and App gaming categories. Super Steve World has 4 likes from 4 user ratings. If you enjoy this game then also play games Super Mario Bros. and Super Mario 64. Arcade Spot brings you the best games without downloading and a fun gaming experience on your computers, mobile phones, and tablets. New arcade games and the most popular free online games are added every day to the site.