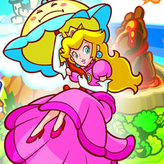 Bowser had successfully captured Mario, Luigi, and Toad, and it’s up to Princess Peach to save the day on this fun platforming game – Super Princess Peach!

If you think for a second that Princess Peach is helpless, think again! Super Princess Peach is a platforming video game released back in 2005 for the Nintendo DS gaming console. The game takes a twist from the usual story where Mario and Luigi rescue the Princess from Bowser. In this game, it is Mario and Luigi that have been kidnapped and it’s up to Princess to save them from the hands of the evil Bowser. The game plays similar to the traditional mario game but with Princess Peach as the main character. The game features eight worlds with six levels each, and a boss character at the end of each worlds.

Play Super Princess Peach game online in your browser free of charge on Arcade Spot. Super Princess Peach is a high quality game that works in all major modern web browsers. This online game is part of the Platform, Emulator, Mario, and Nintendo DS gaming categories. Super Princess Peach has 5 likes from 5 user ratings. If you enjoy this game then also play games Super Mario Bros. and Super Mario 64. Arcade Spot brings you the best games without downloading and a fun gaming experience on your computers, mobile phones, and tablets. New arcade games and the most popular free online games are added every day to the site.