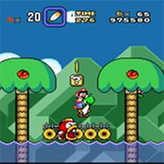 Experience a fresh Mario gameplay in this fun vanilla-styled hack. Discover new secrets, explore new areas, and witness a new awesome story in Super Mario World: The Magical Crystals. With the new level design, will you be able to complete and pass through all 115 exits?

Super Mario World: The Magical Crystals, also known as Classic Mario World: The Magical Crystals, is a fun hack of the Super Nintendo Entertainment System (SNES) game Super Mario World. Created by Bandicoot from SMW Central, this modified game features a whole lot of new levels, blocks, enemies, and even has its own custom music to boot. Along with the changes also comes a new storyline involving Bowser using a new source of power known as the Magical Crystals. With the new power source, Bowser became stronger than ever, and kidnapped Princess Peach once again, along with all of Yoshi's friends. It's up to Mario to stop Bowser, rescue the princess, and save the kingdom. The traditional gameplay remains the same and the creator tried to stick to the hack being as vanilla as possible while adding new features, content, and map style. The game also adds several new gameplay mechanics just to spice things up.