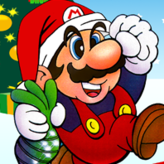 Who does not like Christmas? Especially with friends around. Super Mario Bros 2: Christmas Edition lets you play as Mario, Luigi, Toad, or Princess Peach in this yuletide themed platformer. Navigate through twenty different levels across seven worlds. All four characters have their unique ability that would cater to your playing style. Mario can jump farther, but Luigi can jump higher, Princess Peach can float because of her gown, and Toad, with his strength, can pick up items easily. It depends on you to play these characters to their strengths to enjoy the game. Jumping on enemies does not work like previous Mario titles. You can ride on them or stand on them, but you must pick up objects and throw them at them to remove them from the Map. This can be done with vegetables sticking from the ground. Each of the twenty levels has different themes but is made more appealing to the Christmas season. Potions can be used to convert the world to an inverted version, collect coins, mushrooms, and enjoy increased health. Jars would also warp the players to another world for a faster route. A new villain would be waiting for you at the end of the game named Wart. Defeat all the other bosses in each level and ready yourself to defeat this evil frog. Lose Lives and start from the beginning, collect floating hearts, and defeat enemies. Super Mario Bros 2: Christmas Edition. The season to be jolly has just begun!