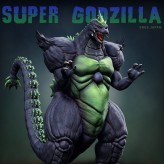 Control the king of all beasts, Godzilla, as you seek its help in order to bring down the monster that ran amok at Osaka in Super Godzilla. Guide Godzilla and avoid him from further harm until you reach the final boss.

Super Godzilla is a video game developed by Advance Communication Company for Super Nintendo Entertainment System (SNES) which was first released in 1993 in Japan. This game is split into two screens where the top part shows the animation of Godzilla and the lower part serves as a map and controller in order to guide the giant beast in each stage while avoiding obstacles. The screen automatically switches to a standard view during enemy battle mode in a two-dimensional fighting setup. Pay attention to the energy points of Godzilla as it decreases when being attacked by enemies and crashing through the buildings. There are energy resupply points scattered all over the city that can be used in order to refill the energy points. Head for the source of the attack in Osaka and bring a stop to this chaos. Good luck!

Play Super Godzilla game online in your browser free of charge on Arcade Spot. Super Godzilla is a high quality game that works in all major modern web browsers. This online game is part of the Arcade, Action, Emulator, and SNES gaming categories. Super Godzilla has 6 likes from 7 user ratings. If you enjoy this game then also play games Super Mario Bros. and Super Mario 64. Arcade Spot brings you the best games without downloading and a fun gaming experience on your computers, mobile phones, and tablets. New arcade games and the most popular free online games are added every day to the site.