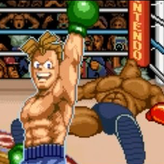 Play the role of the amateur boxer with big dreams, Little Mac, as he fights his way to become the World Video Boxing Association champion in this fun boxing video game – Super Punch-Out!!

Super Punch-Out!! is a classic 1996 boxing video game released for the Super Nintendo Entertainment System (SNES). The game features similar gameplay and game mechanics as the preceding Super Punch-out games. In this game, the player takes the role of an amateur boxer, that can be named by the player, as he tries to reach his dream of becoming the next WVBA champion. The game has a cool animation and a third-person perspective. The goal of each match is to knock out the opponent by beating down his health points to zero or wait for the decision. Will you be able to reach your dreams and become the next champion? Good luck!

Play Super Punch-Out!! game online in your browser free of charge on Arcade Spot. Super Punch-Out!! is a high quality game that works in all major modern web browsers. This online game is part of the Arcade, Sports, Emulator, and SNES gaming categories. Super Punch-Out!! has 6 likes from 6 user ratings. If you enjoy this game then also play games Super Mario Bros. and Super Mario 64. Arcade Spot brings you the best games without downloading and a fun gaming experience on your computers, mobile phones, and tablets. New arcade games and the most popular free online games are added every day to the site.