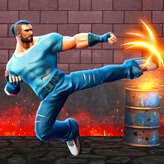 Street Mayhem - Beat 'Em Up is a fantastic modern take on the classic beat'em up arcade games. Fight through the Dark City with a friend in multiplayer mode. Will you be able to defeat the mastermind and rid of the darkness in the city?

Fight against mutants and bad guys across different parts of the city in this fun retro-styled game - Street Mayhem. Accompany Edward, Jennifer, and Russell as they fight against the scoundrels of the city. Each character has his/her own set of abilities that calls for a different playstyle. Start with Edward with a fighting style of boxing and wrestling and acquire points to unlock Russel who is good at boxing and gambling and Jennifer who has masterful ninja moves capable of dishing out quick attacks that will render enemies defenseless. Go across the Dark City, Forest, City Town, and to the castle as you dive into the game's story. Destroy various objects on the map to reveal hidden power-ups that will temporarily boost your character's fighting abilities.

If you are in the mood for some friendly spar, then play the game's 2 Player Mode where you can fight against a friend by sharing keyboard controls. Be the first to win 3 matches and earn some bragging rights.

Play Street Mayhem game online in your browser free of charge on Arcade Spot. Street Mayhem is a high quality game that works in all major modern web browsers. This online game is part of the Arcade, Multiplayer, Action, and Fighting gaming categories. Street Mayhem has 2 likes from 2 user ratings. If you enjoy this game then also play games Street Fighter 5 and Street Fighter 2. Arcade Spot brings you the best games without downloading and a fun gaming experience on your computers, mobile phones, and tablets. New arcade games and the most popular free online games are added every day to the site.