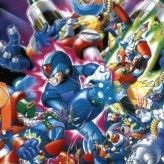 Play the role of the cyborg Mega Man and stop the Reploid scientist named Dr. Doppler in this classic action platformer game Mega Man X3! Join forces with the sword wielding Zero and defeat all Mavericks you encounter!

Mega Man X3, also known as Rockman X3, is a platforming action game originally released back in 1995 as a sequel to Mega Man X and X2. The game is set on a fictional futuristic world where the entire world is inhabited by humans and intelligent robots called Reploids. Like humans, some Reploids tend to do bad and are labeled as “Mavericks”. In this game, you will take control of Mega Man, and your goal is to find the Reploid scientist who are responsible for creating strong and powerful Mavericks.

Play Mega Man X3 game online in your browser free of charge on Arcade Spot. Mega Man X3 is a high quality game that works in all major modern web browsers. This online game is part of the Adventure, Arcade, Emulator, and SNES gaming categories. Mega Man X3 has 98 likes from 102 user ratings. If you enjoy this game then also play games Pokemon Omega Ruby and Pokemon Mega Emerald X & Y. Arcade Spot brings you the best games without downloading and a fun gaming experience on your computers, mobile phones, and tablets. New arcade games and the most popular free online games are added every day to the site.