Star Wars - Flight of the Falcon 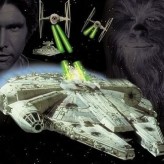 Fly the Millennium Falcon into space and battle the forces of the Empire! Complete the story of the original Star Wars trilogy in Star Wars – Flight of the Falcon! Experience never before seen plot twists and re-live the inter-galactic story!

Star Wars – Flight of the Falcon is a space shooter game based on the Star Wars trilogy and franchise. In this game, you get to control the popular Millennium Falcon as well as other space crafts through 14 various missions. The game features playable locations including an asteroid field, planet Yavin, the moon of Endor, and even the popular Death Star. Destroy the Death Star and show the dark forces what they are up against!
Click inside the screen to activate controls