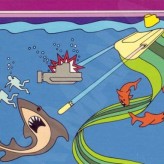 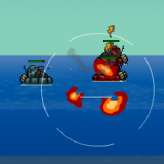 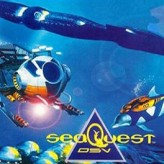 Takes the role of the captain of the submarine seaQuest DSV 4600, and carry out various missions in a series of levels, divided up as “ocean quadrants” in this awesome old-school game. Pilot mini-subs, robots, and other underwater vehicle and have fun!

SeaQuest DSV is a real-time strategy / simulator game that was released back in 1995 for the Super Nintendo Entertainment System (SNES). The game is divided into two parts: isometric exploration, and underwater horizontal side-scrolling mission. The game is based on a TV Show of the same name that was aired back in the good old days. Take control of the SeaQuest submarine and explore the underwater world. Complete various objectives using an array of mini-subs, robots, and a trained dolphin wearing an aqua-lung.

Play SeaQuest DSV game online in your browser free of charge on Arcade Spot. SeaQuest DSV is a high quality game that works in all major modern web browsers. This online game is part of the Arcade, Strategy, Emulator, and SNES gaming categories. SeaQuest DSV has 3 likes from 3 user ratings. If you enjoy this game then also play games Seaquest and Naval Seaquest. Arcade Spot brings you the best games without downloading and a fun gaming experience on your computers, mobile phones, and tablets. New arcade games and the most popular free online games are added every day to the site.