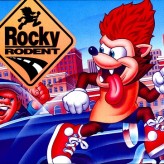 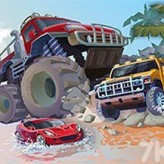 Rocky accidentally ate an envelope full of Balboa’s protection money! Help Rocky escape the mobsters’ wrath in this fun platformer game – Rocky Rodent! Rescue Balboa’s daughter from the mobsters and go on an eat-all-you-can buffet as a reward

Rocky Rodent (also known as Nitropunks: Mightheads) is a classic platformer video game released back in 1993 for the Super Nintendo Entertainment System (SNES). The game’s character is like a combination of Tazmanian Devil and Sonic the Hedgehog mascots. The game features six levels and each level features multiple stages. The game also features some comic book elements where speech bubbles pop up when the characters are talking. Will you be able to rescue Balboa’s daughter and eat as much as you want afterward? Good luck!

Play Rocky Rodent game online in your browser free of charge on Arcade Spot. Rocky Rodent is a high quality game that works in all major modern web browsers. This online game is part of the Arcade, Retro, Emulator, and SNES gaming categories. Rocky Rodent has 2 likes from 3 user ratings. If you enjoy this game then also play games Rocky and Pocky and Rocky. Arcade Spot brings you the best games without downloading and a fun gaming experience on your computers, mobile phones, and tablets. New arcade games and the most popular free online games are added every day to the site.