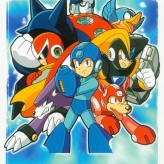 Choose a hero to control and defeat three sets of Robot Masters in this fun fighting arcade video game – Rockman Battle & Fighters! Defeat each boss and upgrade your abilities to be able to use the boss’s attacks. Good luck!

Rockman Battle & Fighters is a fighting video game in the Mega Man series. The game was released back in 2000 for the SNK Neo Geo Pocket Color handheld system exclusively in Japan. The game is basically a scaled down Neo Geo Pocket Color port of Mega Man: The Power Battle with some features of the 2nd game. In this game, you can choose one among the four hero characters and your goal is to defeat a series of enemy bosses in a one on one match.

Play Rockman Battle & Fighters game online in your browser free of charge on Arcade Spot. Rockman Battle & Fighters is a high quality game that works in all major modern web browsers. This online game is part of the Arcade, Action, Emulator, and Neo Geo Pocket gaming categories. If you enjoy this game then also play games Rockman & Forte and Rockman X. Arcade Spot brings you the best games without downloading and a fun gaming experience on your computers, mobile phones, and tablets. New arcade games and the most popular free online games are added every day to the site.