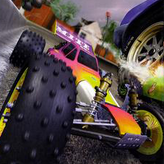 Choose your own remote control car and race around the crazy huge tracks in this fun racing video game for the N64 – Re-Volt! Race across some cool location and try to pass the finish line first and win!

Re-Volt is a racing video game that was released back in 1999 for various gaming consoles including the Nintendo 64 (N64) gaming hardware. The game is known to feature some very good simulation of the radio control racing cars. Although this N64 version of the game is known to be not as good as the PC version due to lower frame rate and the absence of the Clockwork Carnage mode, the N64 version features remixed soundtracks that are better than the original. Will you be able to compete on all the challenging tracks? Good luck!

Play Re-Volt game online in your browser free of charge on Arcade Spot. Re-Volt is a high quality game that works in all major modern web browsers. This online game is part of the Racing, Arcade, Emulator, and N64 gaming categories. Re-Volt has 1 likes from 1 user ratings. If you enjoy this game then also play games Super Mario 64 and Super Smash Bros.. Arcade Spot brings you the best games without downloading and a fun gaming experience on your computers, mobile phones, and tablets. New arcade games and the most popular free online games are added every day to the site.