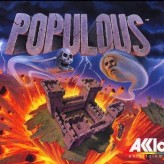 Play the role of a powerful deity and help your followers become prosperous and overcome various obstacles in Populous! Overcome your rival deities and their followers as you strive to have more dominion!

Populous is a classic 1989 God Game released for the Super Nintendo Entertainment System, and is commonly cited as the founding title in the god game genre, and was itself a successful real-time strategy game at the time. Influence how the population behaves by setting their priorities and use your powers to level lands, create volcanoes, create swamps, and even flood the map. Play as the good god and prosper your people, or play as a vile and evil god to make your people have faith in you by force and by blood. Have fun!

Play Populous game online in your browser free of charge on Arcade Spot. Populous is a high quality game that works in all major modern web browsers. This online game is part of the Arcade, Strategy, Emulator, and SNES gaming categories. Populous has 1 likes from 1 user ratings. If you enjoy this game then also play games Populous 2: Wrath of Gods and Populous 2: Two Tribes. Arcade Spot brings you the best games without downloading and a fun gaming experience on your computers, mobile phones, and tablets. New arcade games and the most popular free online games are added every day to the site.