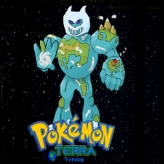 Two evil groups are battling over the region of Hoenn. Start your new Pokemon journey with Generation 4 and 5 Pokemons in Pokemon Terra! Play as Brendan and venture out to a new version of the Hoenn region.

Pokemon Terra is a Pokemon rom hack created by username DarkDon43. In this game, you will play as a boy named Brendan as he ventures out to a new Hoenn region facing two evil teams: Team Ander and Team Cypher. The game features Generation four and 5 Pokemons, as well as a much harder overall difficulty levels. Your starter Pokemon is a choice among Eevee, Spheal and Larvitar, and you are going to go on an adventure competing against two rivals Manny and Mikey. Start your adventure anew and have fun!

There have been 26 likes from 28 votes on this game.

Play Pokemon Terra game online in your browser free of charge on Arcade Spot. Pokemon Terra is a high quality game that works in all major modern web browsers. This online game is part of the Adventure, Strategy, GBA, and Pokemon gaming categories. Pokemon Terra has 26 likes from 28 user ratings. If you enjoy this game then also play games Pokemon Fire Red Version and Pokemon Emerald Version. Arcade Spot brings you the best games without downloading and a fun gaming experience on your computers, mobile phones, and tablets. New arcade games and the most popular free online games are added every day to the site.