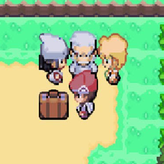 Play as a 10 year old boy and travel through the rich region of Sinnoh. Travel through time and meet new Pokemons in Pokemon Sinnoh Legacy! Stop Stavros from his evil plans and try to become the champion of Sinnoh! Restore balance to the region while keeping Barry your friend.

Pokemon Sinnoh Legacy is a fan-made Pokemon hack based on Pokemon Fire Red. In this game, you start of as a 10 year old boy on his way to becoming the greatest Pokemon master of all time and defeating one gym leader after another. however, after a few gym fights, some hackers were introduced with ASMagix skills. This new skill allow them to alter the timeline of Sinnoh. The game features a total of 649 Pokemons, multiple accessible regions, day and night cycle, time travel, and many more.

There have been 68 likes from 76 votes on this game.

Play Pokemon Sinnoh Legacy game online in your browser free of charge on Arcade Spot. Pokemon Sinnoh Legacy is a high quality game that works in all major modern web browsers. This online game is part of the Adventure, Strategy, GBA, and Pokemon gaming categories. Pokemon Sinnoh Legacy has 68 likes from 76 user ratings. If you enjoy this game then also play games Pokemon Fire Red Version and Pokemon Emerald Version. Arcade Spot brings you the best games without downloading and a fun gaming experience on your computers, mobile phones, and tablets. New arcade games and the most popular free online games are added every day to the site.