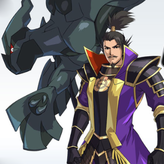 Unify all the 17 kingdoms of the Ransei Region and face the legendary Pokemon in this strategy Pokemon crossover game – Pokemon Conquest! Will you be able to find and face the Legendary Pokémon Arceus? Good luck and have fun!

Pokemon Conquest, or also known as Pokémon + Nobunaga’s Ambition in Japan, is a tactical role-playing video game mixing the turn-based tactical gameplay of the popular Nobunaga’s Ambition game with the characters, units, sprites, and elements of the Pokemon universe. The goal of the game is to conquer the two kingdoms of Terrera and Illusio, and then conquer the rest of the kingdom to unite the land, and face the legendary Legendary Pokémon Arceus. Make an army of powerful Pokemon and conquer the entire region!

Play Pokemon Conquest game online in your browser free of charge on Arcade Spot. Pokemon Conquest is a high quality game that works in all major modern web browsers. This online game is part of the Strategy, Action, Pokemon, and Nintendo DS gaming categories. Pokemon Conquest has 4 likes from 4 user ratings. If you enjoy this game then also play games Pokemon Fire Red Version and Pokemon Emerald Version. Arcade Spot brings you the best games without downloading and a fun gaming experience on your computers, mobile phones, and tablets. New arcade games and the most popular free online games are added every day to the site.