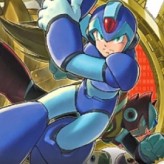 The Mavericks from Mega Man X1 and X2 are back! You must go to the virtual world and stop the hacking to bring back order in Megaman Xtreme. Go into cyberspace and relive Mega Man X’s past missions and put a stop to the evil group’s plans.

Megaman Xtreme (also known as Rockman X: Cyber Mission) is an action platformer video game created back in 2000 for the Game Boy Color hand held system, (GBC). The game is a spin-off title of SNES game Mega Man X and its series of video games. Megaman Xtreme is also the first portable Mega Man X, and sets itself into the 22nd century. Stop the androids called “Shadow Huners” from destabilizing all networks before it’s too late.

Play Megaman Xtreme game online in your browser free of charge on Arcade Spot. Megaman Xtreme is a high quality game that works in all major modern web browsers. This online game is part of the Arcade, Action, Emulator, and GBC gaming categories. Megaman Xtreme has 2 likes from 3 user ratings. If you enjoy this game then also play games MegaMan X6 and Megaman X in Sonic 2. Arcade Spot brings you the best games without downloading and a fun gaming experience on your computers, mobile phones, and tablets. New arcade games and the most popular free online games are added every day to the site.