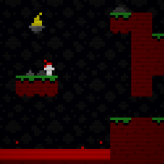 Play the role of the hero Max and blow stuff up to rescue the 33 missing archaeologists. Go down the ancient tomb and be a hero in MaXploder! Use your bombs to destroy giant monsters, open paths, and blow yourself up!

MaXploder is a retro-styled action platformer game inspired by the classic games like H.E.R.O. back on the c64. In this game, you will play as Max. Summoned by the president to rescue the 33 archaeologist who got trapped inside an ancient tomb. As Max you can jump higher and move faster than average humans, and you have tons and tons of bombs you carry along. Use this bomb to open paths, blow enemies, blow stuffs up, and even blow yourself up!

Play MaXploder game online in your browser free of charge on Arcade Spot. MaXploder is a high quality game that works in all major modern web browsers. This online game is part of the Adventure, Arcade, Platform, and Challenge gaming categories. MaXploder has 1 likes from 1 user ratings. If you enjoy this game then also play games Five Nights at Freddy's 2 and Five Nights at Freddy's. Arcade Spot brings you the best games without downloading and a fun gaming experience on your computers, mobile phones, and tablets. New arcade games and the most popular free online games are added every day to the site.