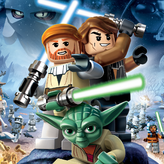 Step into the Star Wars LEGO universe and create your very own X-wing! Wield that lightsaber and destroy the Dark Side in LEGO Star Wars 3: The Clone Wars! Fight your enemies, solve puzzles, and collect Lego Coins to unlock new characters and new costumes.

Lego Star Wars III: The Clone Wars is an action-adventure video game released back in 2011 for various gaming platforms including the Nintendo DS. The game features the same gameplay as the previous LEGO Star Wars titles but this game uses a new and upgraded gaming engine that can hold more than 200 moving units in a single screen, and have more details in the surrounding and even the lights. Will you be able to unlock 100% of the game? Good luck and have fun!

There have been 4 likes from 7 votes on this game.