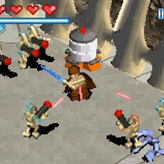 Use the power of the force and your skill in lightsaber swordsmanship as you take down your foe in the plastic Star Wars universe in Lego Star Wars! Take the role of Jedi tasked with saving the world! Keep the forces of darkness in the universe in check!

Lego Star Wars is a 2005 video game based on the Star Wars and Lego group franchise and is the first Lego game franchise of the TT Game company. Just like in any version of this game, the GBA version is geared for family play and features puzzles and lots of action. Be prepared to put down plastic enemies and use the force to move Lego pieces and create something new! Lead the rebels against the galactic empire!

There have been 54 likes from 58 votes on this game.

Play Lego Star Wars game online in your browser free of charge on Arcade Spot. Lego Star Wars is a high quality game that works in all major modern web browsers. This online game is part of the Adventure, Action, Emulator, and GBA gaming categories. Lego Star Wars has 54 likes from 58 user ratings. If you enjoy this game then also play games LEGO Indiana Jones Game and LEGO Star Wars: The Complete Saga. Arcade Spot brings you the best games without downloading and a fun gaming experience on your computers, mobile phones, and tablets. New arcade games and the most popular free online games are added every day to the site.