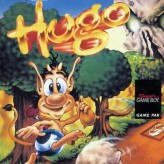 Follow the small protagonist named Hugo as he goes on an adventure to defeat the witch named Scylla and lift her curses in this action adventure game!

Hugo is an action-adventure video game with plenty of mini-games scattered all throughout. This Game Boy (GB) handheld version is the original game that focuses on the Crazy Castle gameplay. In this game, Hugo has been kidnapped and imprisoned by his enemies. Find a way out of the huge castle and keep Hugo away from dangers. The game features a 2D multi-scrolling platformer video gameplay. Avoid the prison guards, climb ladders, flip switches, and avoid traps and other hazards as you try to find your way out in this classic game. Good luck!

Play Hugo game online in your browser free of charge on Arcade Spot. Hugo is a high quality game that works in all major modern web browsers. This online game is part of the Arcade, Retro, Emulator, and GB gaming categories. Hugo has 1 likes from 1 user ratings. If you enjoy this game then also play games Hugo: The Evil Mirror and Hugo: Black Diamond Fever. Arcade Spot brings you the best games without downloading and a fun gaming experience on your computers, mobile phones, and tablets. New arcade games and the most popular free online games are added every day to the site.