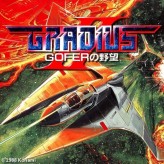 The planet Gradius is under hostile threat once again! Take control of the super-dimensional warplane called Vic Viper and eliminate all enemies in Gradius 2! Select between multiple weapon and shield modules to take down your enemies.

Gradius 2 is a classic 1988 video game that is a follow-up to Konami’s shoot-em-up classic. Also known as Nemesis 2, the game is a side-scrolling shooter that is considered as one of the greatest NES gems. In this game, you take control of an advanced space fighter plane known as the Vic Viper, and your goal is to blast through waves of enemies to save the planet called Gradius. The game is known for its fast-paced combat, intense action, and wonderful background music that fits perfectly to the action. Have fun!

Play Gradius 2 game online in your browser free of charge on Arcade Spot. Gradius 2 is a high quality game that works in all major modern web browsers. This online game is part of the Arcade, Shooting, Emulator, and NES gaming categories. Gradius 2 has 2 likes from 2 user ratings. If you enjoy this game then also play games Gradius III and Gradius. Arcade Spot brings you the best games without downloading and a fun gaming experience on your computers, mobile phones, and tablets. New arcade games and the most popular free online games are added every day to the site.