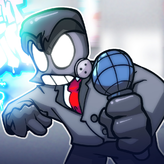 Friday Night Funkin Vs. Anders Full Week is an FNF mod that features one custom character, three new songs, and even its own story told through custom dialogue and cutscenes. This mod introduces another character to the Friday Night Funkin universe. Boyfriend has become so popular that he now earned some enemies, enemies that lurk in the shadows. An agent from an unknown group has stepped on the stage to take on Boyfriend and end his run as the greatest emcee alive.

Anders is a tall man wearing a formal grey attire over his white shirt, sports a red tie, and holes on both sides of his face. He smells like danger from a mile away, but Friday Night Funkin is not about the violence. It's about the music!

Anders will challenge you to a heated rap battle and would only leave you alone if you win. With a gun in his hand, Anders looks menacing. But you have the mic and the dexterity to string together combos of sweet music that will blow him away. Impress, girlfriend, as you groove along to the beat of this crazy hitman.

This mod's new songs feature their own charts for all three difficulties. The songs are:

Once you get the melody, there is no stopping you from sending this hitman from where he came from. Friday Night Funkin Vs. Anders Full Week amps the action with colorful visuals and funky tunes. There can only be one, now say Hasta La Vista to Sanders.