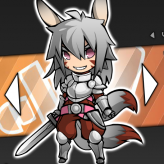 Can't get enough of Friday Night Funkin'? Play around with the original and modded characters in FNF Character Test Playground Remake. Just press a button and hear your favorite character's sounds.

FNF Character Test Playground Remake, as the name implies, is a recreation of the FNF Character Test Playground made by the same developer, MadManToss. The game functions as a developers test playground in which you can view the different characters, backgrounds, arts, and sounds of the game. This game features nine official characters from the Ninjamuffin99's Friday Night Funkin', including their respective background and setting. As well as a whopping twenty-four characters from different popular mods such as Miku, Stickman, and more. You can press the five buttons and hear your character's voice as they sing.

Friday Night Funkin' Test Playground Remake also includes different tools, including pitch adjustment, flip character switch, a series of background music, and a customizable background RGB. Although the rhythm game is unplayable, the game features a total of eighteen background music from the original FNF game that you can choose and listen to or choose not to listen to any music by picking 'none'. The available music pieces are: