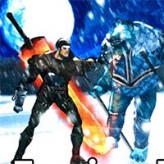 Step inside the world of Rio De Luz and fight battles against players from across the globe. Complete missions, and buy some upgrades in Esgrima! Create your very own character and step into the late medieval world battling monsters and other players!

Esgrima is a turn based action MMORPG game with beautiful artstyle. Rio De Luz was once a peaceful land that knows no conflict. However one day, a wizard created something that he shouldn’t. Afraid of his creation, he banished it far far away, hoping it will never return. But the realization of this dark power made some men crazy and began usurping others. Enter the world of light fantasy and create your own destiny! Buy upgrades and ready your new gear as you become one of the greatest heroes in the history of Rio De Luz.

Play Esgrima game online in your browser free of charge on Arcade Spot. Esgrima is a high quality game that works in all major modern web browsers. This online game is part of the Multiplayer, Strategy, MMO, and Challenge gaming categories. Esgrima has 1 likes from 1 user ratings. If you enjoy this game then also play games Five Nights at Freddy's 2 and Five Nights at Freddy's. Arcade Spot brings you the best games without downloading and a fun gaming experience on your computers, mobile phones, and tablets. New arcade games and the most popular free online games are added every day to the site.