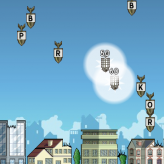 The enemy has used an air raid against your city! Intercept the bombs by typing their corresponding letters in this classic game – Alphattack! Use the ultimate Panic Bomb to destroy all enemies on the screen to avoid getting overwhelmed.

Alphattack is a classic skill based flash game where your goal is to prevent the destruction of the city for as long as possible. In this game, bombs will dropped from the sky and your goal is to destroy the enemy bombs by typing the letters shown in the body of the bomb. There are also other enemies like critters that deal even more damage to buildings and Zeppelins that require a 3 digit code to bring down. Try to survive for as long as you can and have fun!

Play Alphattack game online in your browser free of charge on Arcade Spot. Alphattack is a high quality game that works in all major modern web browsers. This online game is part of the Arcade, Action, Skill, and Challenge gaming categories. Alphattack has 1 likes from 1 user ratings. If you enjoy this game then also play games Five Nights at Freddy's 2 and Five Nights at Freddy's. Arcade Spot brings you the best games without downloading and a fun gaming experience on your computers, mobile phones, and tablets. New arcade games and the most popular free online games are added every day to the site.