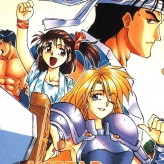 Become the pride of your nation and be the hero you once sought to be in this action packed arcade fighting game – World Heroes 2! Choose from 14 characters, each with their unique skill set and equipment, and battle others around the globe.

World Heroes 2 is classic fighting arcade game developed and published in 1993 by ADK. World Heroes 2 uses most of the elements from its predecessor including the controls. The game features “Normal Game” and “Death Match” modes. In Normal game you must defeat 6 characters from the previous genre, then 4 of the newly added character, then 2 bosses. Death Match mode features new environmental hazards and a unique life bar called “seesaw lifebar” World Heroes 2 features a total of 14 selectable characters, projectile reflecting skills, counter grabbing mechanics, and faster gameplay.

Play World Heroes 2 game online in your browser free of charge on Arcade Spot. World Heroes 2 is a high quality game that works in all major modern web browsers. This online game is part of the Arcade, Action, Emulator, and Neo Geo gaming categories. World Heroes 2 has 39 likes from 39 user ratings. If you enjoy this game then also play games Super Mario World and The Worlds Easyest Game. Arcade Spot brings you the best games without downloading and a fun gaming experience on your computers, mobile phones, and tablets. New arcade games and the most popular free online games are added every day to the site.