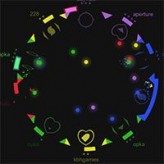 Play pingpong with literally dozens of players at a time in this awesome competitive multiplayer game! Be the last surviving player to win in Opka.io! Reflect all incoming balls with your paddle and try to make other players lose.

Opka.io is an online massive multiplayer ping pong io game unique to all other io games. In this game, you will play with millions of players in a big match of ping pong. However, the game is not set around 2 players taking a match, but rather dozen of players play at the same time by forming a circle and volleying the balls around the circle. Each player has it’s home base and your goal is to prevent the ball from passing on to your side and volley it back to the opponents. The last player to remain standing will win the game.

The game is still in early development so expect some bugs and lag.

Play Opka.io game online in your browser free of charge on Arcade Spot. Opka.io is a high quality game that works in all major modern web browsers. This online game is part of the Arcade, Multiplayer, Challenge, and IO gaming categories. Opka.io has 1 likes from 1 user ratings. If you enjoy this game then also play games Bonk.io and Slither.io. Arcade Spot brings you the best games without downloading and a fun gaming experience on your computers, mobile phones, and tablets. New arcade games and the most popular free online games are added every day to the site.