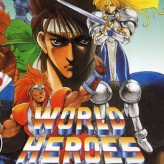 Fight against the best and strongest fighters of the world from different areas and time in this cool fighting arcade game – World Heroes! With the help of Dr. Brown’s perfect time machine, you’ll get a chance to go head to head with history’s toughest fighters!

World Heroes is the original and first of the four fighting game series created for the Neo Geo arcade system. Published back in 1992, the game is similar to many other fighting game, but instead of having 6-button layout, World heroes uses only 3 of the standard four buttons. Some attacks can be held down longer to deliver a more powerful version of the attack. Many fighters of the game are based on actual historical figures, while some are fictional ones.

Play World Heroes game online in your browser free of charge on Arcade Spot. World Heroes is a high quality game that works in all major modern web browsers. This online game is part of the Arcade, Action, Emulator, and Neo Geo gaming categories. World Heroes has 2 likes from 2 user ratings. If you enjoy this game then also play games Super Mario World and Super Mario World: Super Mario Advance 2. Arcade Spot brings you the best games without downloading and a fun gaming experience on your computers, mobile phones, and tablets. New arcade games and the most popular free online games are added every day to the site.