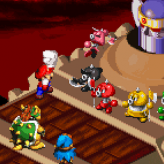 Join Mario in his very first RPG adventure! Explore new areas of the Mushroom Kingdom and stop the mechanical Smithy in Super Mario RPG – Legend of the Seven Stars! Play as Super Mario and enter tactical turn-based combat against monsters and enemies to save the land!

Super Mario RPG – Legend of the Seven Stars is a classic 1996 RPG game and the first RPG of the Mario franchise. This game contains similar features and tokens of other Square’s video games like the Final Fantasy series. The game combines the casual Mario goodness with Square’s hardcore RPG making the game quite unique. Music, plot, challenge, art-style, gameplay, sound effects, and other aspects of the game is outstanding. If you’re a Mario or RPG fan, then this game is a must-try. Help Mario find the seven stars and save the entire world!

P.S. Bowser isn’t kidnapping the princess in this game!

There have been 87 likes from 93 votes on this game.