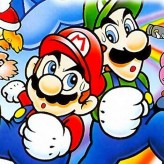 Play the classic 1985 Mario game with 1999 technology and enjoy the improved performance and updated features in Super Mario Bros. Deluxe! Play as Luigi, pick a level that you’ve beaten and try it out again with more challenges!

Super Mario Bros. Deluxe is a remake of the classic 1985 Super Mario Bros for the NES system. The game features many updates from the original version including fixes for the known glitches and the ability to play as Luigi! Collect medals by finding and collecting all red coins on a level or getting a higher points than the average. The game also has secret features such Boo appearing on the menu to challenge you on a race, and so much more! Have fun!