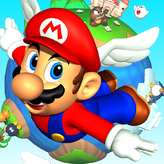 Play as the brave and heroic plumber, Mario and save the abducted Princess Peach from the hands of the evil Bowser in this arcade platformer game – Super Mario 64 Shindou Edition!

Super Mario 64 Shindou Edition is an arcade platformer game released for the N64 in the year 1996. This game is the Japanese version of Super Mario 64 which uses the Japanese language as the main language. The game lets you see the world of Mario in 3D! The game lets you play as the plumbing brothers, Mario and Luigi, and they’re on a quest to save Princess Peach who was abducted by Bowser. Use yourl caps to fly, turn into a strong metal, or even become invisible! Win all 120 levels and collect all 120 stars and beat Bowser up! Good luck!

Play Super Mario 64: Shindou Edition game online in your browser free of charge on Arcade Spot. Super Mario 64: Shindou Edition is a high quality game that works in all major modern web browsers. This online game is part of the Arcade, Action, Mario, and N64 gaming categories. If you enjoy this game then also play games Super Mario Bros. and Super Mario 64. Arcade Spot brings you the best games without downloading and a fun gaming experience on your computers, mobile phones, and tablets. New arcade games and the most popular free online games are added every day to the site.