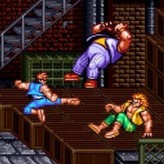 A dangerous criminal group called Black Warriors kidnapped Billy Lee’s girlfriend! Save Marian and defeat all thugs along the way in Super Double Dragon! Help Billy fight waves of enemies to save Marian and keep the secrets of his martial arts.

Super Double Dragon is the fourth Double Dragon game of the series, and is the first to be released outside of the arcade gaming platform. In this game, Marian (Billy’s girlfriend) has been kidnapped by the Black Warriors. In exchange for his girlfriend, Billy must reveal the secrets of his martial arts. However, Billy won’t stand for these underhanded tactics so he decided to rescue her himself! Use different kinds of techniques and fight hordes of enemies through out city streets, jungles, and temples! Will you be able to save Marian and protect the secret technique?

Play Super Double Dragon game online in your browser free of charge on Arcade Spot. Super Double Dragon is a high quality game that works in all major modern web browsers. This online game is part of the Arcade, Action, Emulator, and SNES gaming categories. Super Double Dragon has 2 likes from 3 user ratings. If you enjoy this game then also play games Super Mario Bros. and Super Mario 64. Arcade Spot brings you the best games without downloading and a fun gaming experience on your computers, mobile phones, and tablets. New arcade games and the most popular free online games are added every day to the site.