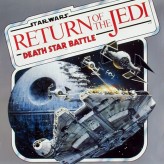 The dreaded Death Star is a threat to all! Fly your advanced space fighter plane and destroy the Death Star in Star Wars: Return of the Jedi – Death Star Battle! Attack the big chunk of destruction and survive the explosion.

Star Wars: Return of the Jedi – Death Star Battle is an action shooter arcade video game released back in 1983 for the Atari 2600 arcade system. The game is based on the film Star Wars: Return of the Jedi and features a plot and elements mirroring the film. In this game, you are sent to destroy the rebuilding of the Death Star. Clear a path to the reactor, do your work and make your faction proud. Once the game is completed, it will restart to a higher difficulty setting. Good luck!