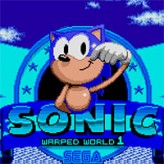 Play the Sonic ROM hack that caused a lot of controversy! Defeat Eggman and his evil Robotic Empire in this awesome Sonic game – Sonic Warped World! Complete all 7 zones and have fun!

Sonic Warped World (previously known as Sonic 1 Team MickBae Edition) is Sonic ROM hack that has caused much controversy. The game takes place after the events of Sonic 3 and Knuckles, where our protagonist Sonic lands back on Mobius only to lose his abilities and powers. To further his misfortune, Eggman also landed on the island and created his very own Robotic Empire! Sonic, on the other side of Chaos Island, decides for himself that he needs to make it through the six zones to destroy the Chaos Extraction Engine in Robotic Empire, and regain some of his lost abilities!

There have been 44 likes from 47 votes on this game.

Play Sonic Warped World game online in your browser free of charge on Arcade Spot. Sonic Warped World is a high quality game that works in all major modern web browsers. This online game is part of the Adventure, Arcade, Emulator, and SEGA gaming categories. Sonic Warped World has 44 likes from 47 user ratings. If you enjoy this game then also play games Sonic Mania Edition and Sonic 3 Complete. Arcade Spot brings you the best games without downloading and a fun gaming experience on your computers, mobile phones, and tablets. New arcade games and the most popular free online games are added every day to the site.