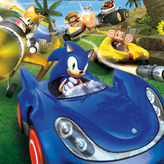 Sonic & SEGA All-Stars Racing is a mascot kart racing video game that was released back in 2010 for various gaming consoles including Nintendo DS (NDS). The game plays similar to the popular Mario Kart racing but features SEGA characters. In this game, the player can choose to race as one of 20 characters from various Sega franchises and game titles including Crazy Taxi, Sonic the Hedgehog, Monkey Ball, Fantasy Zone, and so much more. Each character is riding their own vehicle, even Sonic who can run faster, is riding his own blue vehicle. Will you be able to win against the Nintendo Superstars? Good luck and have fun!

There have been 10 likes from 11 votes on this game.