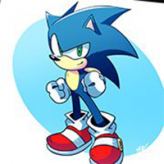 Let’s blast through with Sonic Speed! Sonic 1: Contemporary is a major nod to the first game that made the blue hedgehog a bigger rival to other consoles.

While other game modules focused on the kids, Sonic and Sega decided to cater to the young adult audience. Focusing on developing a character that has an attitude, out came Sonic! Sonic’s the name. Speed is his game. Be dazzled with the blue blur's faster than light running. Jump, and avoid your enemies while collecting gold rings. Time to stop Dr. Robotnik again as he has stolen the powerful chaos emeralds. Gems that have the power to bend reality, stop time, and many more. Sonic is impatient. Try to be idle too long, and you will see him tapping his feet and giving you the ‘tude. Tired of walking and punching through bricks to get coins, blaze through levels that are fraught with loops, bottomless pits, slopes, and springs to add more excitement to your gameplay. Badniks are everywhere, but if you have rings in you, that should not be a problem. Rings still act as a lifesaver, hit hazards, and you will not start from the beginning as long as you collect enough. Finish all acts and get to Dr. Eggman to prevent utter world destruction in Sonic 1: Contemporary.

Play Sonic 1: Contemporary game online in your browser free of charge on Arcade Spot. Sonic 1: Contemporary is a high quality game that works in all major modern web browsers. This online game is part of the Arcade, Retro, Emulator, and SEGA gaming categories. Sonic 1: Contemporary has 7 likes from 8 user ratings. If you enjoy this game then also play games Sonic 3 Complete and Sonic Mania Edition. Arcade Spot brings you the best games without downloading and a fun gaming experience on your computers, mobile phones, and tablets. New arcade games and the most popular free online games are added every day to the site.