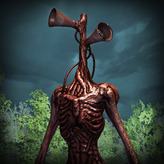 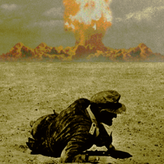 Battle against the huge humanoid creature with sirens for its head in this horror first-person shooter. Play as an agent and complete your missions in Siren Apocalyptic.

Siren Apocalyptic is a first-person shooter horror-survival video game based on the urban legend created by the Canadian horror artist Trevor Henderson. In this game, you will encounter the hostile cryptid known as Sirenhead (or Lamphead). You will play the role of a nameless secret agent that is tasked to explore the strange and dangerous island and investigate the disappearance of the previous agent that was sent there. The goal of the game is to locate the previous agent's hideout, set up security cameras all over the island to track down the dangerous monster, and bring down the Siren Apocalyptic monster at all cost.

Be warned, your bullets cannot kill this ancient creature - but having a gun ready is still better than not carrying a weapon. Other creatures and cryptids lurk on the island. Fortunately, your bullet will work just fine for them. Created using Unity3D Engine, the game features beautiful graphics with intuitive UI that makes the game even more immersive. On top of the Normal Mode, a Hard Mode is also available which makes everything incredible more challenging.

Play Siren Apocalyptic game online in your browser free of charge on Arcade Spot. Siren Apocalyptic is a high quality game that works in all major modern web browsers. This online game is part of the Shooting, Action, Miscellaneous, and Unity gaming categories. Siren Apocalyptic has 2 likes from 2 user ratings. If you enjoy this game then also play games DUST: A Post Apocalyptic Role Playing Game and Sonic Revert. Arcade Spot brings you the best games without downloading and a fun gaming experience on your computers, mobile phones, and tablets. New arcade games and the most popular free online games are added every day to the site.