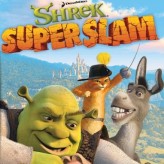 Bash some heads with our beloved mean green ogre Shrek in this arcade fighting game based on the movie franchise – Shrek SuperSlam! Play one of the twenty characters from the movie and use weapons and potions to defeat your opponents!

Shrek SuperSlam is a fighting game for the Game Boy Advance handheld system (GBA) based on the Shrek movie franchise. The game has a similar structure and mechanic to the Smash Bros and Power Stone games. The game features 20 characters from the movie – each character has their own special signature move. The game also features 16 fully-destructible arenas making the game quite entertaining. During a battle you can pick up potions, swords, weapons, and other objects that you can use to your advantage.

Play Shrek SuperSlam game online in your browser free of charge on Arcade Spot. Shrek SuperSlam is a high quality game that works in all major modern web browsers. This online game is part of the Arcade, Action, Emulator, and GBA gaming categories. Shrek SuperSlam has 1 likes from 1 user ratings. If you enjoy this game then also play games Shrek 2 - Beg for Mercy and Shrek - Hassle at the Castle. Arcade Spot brings you the best games without downloading and a fun gaming experience on your computers, mobile phones, and tablets. New arcade games and the most popular free online games are added every day to the site.