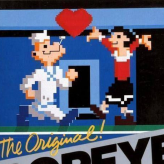 Play the role of the Spinach-eating sailor and collect the items dropped by your loved one Olive Oyl in this classic arcade game - Popeye! Punch your way to victory and eat as much Spinach as you can to win the game! Will you be able to play long enough to beat the world record? Good luck!

Popeye is a classic platformer arcade video game that was released back in 1983 for various gaming and arcade consoles including the Nintendo Entertainment System (NES). Depending on the level, the goal of the game is to collect a certain number of items every level. These items can be a total of 24 hours, 16 musical notes, or letters while trying to avoid the dangers of the ocean including Sea Hags and Popeye's rival Brutus.

Play Popeye game online in your browser free of charge on Arcade Spot. Popeye is a high quality game that works in all major modern web browsers. This online game is part of the Arcade, Retro, Emulator, and NES gaming categories. Popeye has 3 likes from 3 user ratings. If you enjoy this game then also play games Popeye: Rush For Spinach and Popeye Baseball. Arcade Spot brings you the best games without downloading and a fun gaming experience on your computers, mobile phones, and tablets. New arcade games and the most popular free online games are added every day to the site.